All Time Low bounce back into the spotlight with latest record Wake Up, Sunshine

If you had told me back in 2010 that I would be given the opportunity to listen to a new All Time Low album early I probably would have cried but I must admit the band lost my interest when in 2015 Future Hearts failed to live up to my lofty expectations. However, three years have passed since their last release and I’m excited to see what new All Time Low music will sound like have since vocalist Alex Gaskarth joined forces with blink-182’s Mark Hoppus to create Simple Creatures and guitarist Jack Barakat also ventured out to form the band WhoHurtYou.

Some Kind of Disaster kick starts this gigantic 15 track album with a bang. It is by far the best song the band has released in a good while and will certainly be the first All Time Low to be added to my playlists since 2012’s Don’t Panic. According to Alex Gaskarth the band wanted to write something big and anthemic to present All Time Low to the world again and they certainly have. This tune certainly reminds everyone why they are one of the biggest pop-punk bands in recent decades.

Sleeping In and Getaway Green are a throwback to the cheekiness and fun that the quartet are known and adored for, only now with more mature lyrics which I’m sure will be greatly welcomed by their fanbase who are no longer the 16-year olds that were typically found at their concerts back in the day.

The title track Wake Up, Sunshine is all about learning to be ok with yourself and self-validation with the encouraging phrase “wake up sunshine, somebody loves you for yourself” echoing throughout the song. The dreamy bridge represents the feeling of a new awakening for the band as Gaskarth admits to thinking of the last record (Last Young Renegade) like a dream and this is All Time Low waking up back in the real world. Welcome back.

Wake up sunshine, somebody loves you for yourself

Despite the promising opening to the album, the middle portion of the record loses the pop-punk momentum. Monsters and Favourite Place are the only two songs on the album with featuring artists blackbear and The Band CAMINO – respectively – which can only be described as an attempt at trying to appeal to a wider audience – but the collaborations just feel a bit pointless. That’s not to say they are bad songs; I was just very much enjoying the reminiscent vibe of the rest of the album.

Clumsy and Basement Noise draw the album nicely to an end. Both quintessential All Time Low songs in different ways, one reminiscent of their early sound and the other in its lyrical content as they talk about rehearsing in drummer Rian Dawson’s parent’s basement after school.

This is by far the best album All Time Low have released in the past eight years.

Will I give it 4/5 purely because I’m excited to have a new All Time Low album spark my interest? Absolutely.

Listen to Wake Up, Sunshine on Spotify 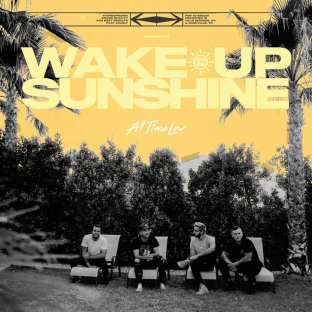