Provocative punkers Lady Bird smash their way into the Boileroom Hall of Fame.

Still not heard of Lady Bird? Fix that. We’ve long said that they’re going to be the next big thing, so it’s about time you listen…

Signing onto Slaves’ own label, Girlfight Records, Lady Bird have been dominating the game recently. Their Untour has gotten off to a spectacular start, already five days into the run and continuing until the 19th December, the tour has been a fantastic way for local bands to play local venues – about halfway into the show, frontman Don Rennols even asked the crowd “who here goes to the local music college? And who here applied to be on this tour?”.

Before the show started, I tried to look up the two support groups, but I couldn’t find much on the local band The Cynicals who opened the show with a warm reception. They’ve played the Boileroom twice already over the past few weeks, and their confidence showed whilst playing on the stage, securing the fact that they’re ones to watch – as if being chosen by Lady Bird wasn’t enough evidence of that statement.

Next up, Parafiction took to the stage. Their online presence was booming and looked very promising. Naturally, I wondered how this energy would transfer into a performance. Unfortunately, I don’t think the audience received them at their best. Mid-way through their opening song (which, to be fair, sounded great), the soldering on the only guitar broke, cutting it out half way. A small break meant that Lady Bird’s Alex could lend his guitar and get it tuned. Their set, sadly, quickly devolved into a series of ongoing tech issues, followed by a continuous onslaught of “Can you turn the backing track up?” “Can you turn my mic up?” and other such comments. It’s perplexing to see how this might’ve come about… did they not have time to soundcheck? Or, is this evidence of a lack of confidence? Or, instead, a demonstration of their ‘punk-ness’?

As the set continued, the two rappers jumped into the crowd and demanded a rowdy pit from which the frontman emerged from a busted lip and sporting some comment about ‘if you don’t come out bleeding you’re not doing it right.’ It makes me wonder what their identity as a band is, and what they seek to get out of their shows.

Despite being the main event, Lady Bird were incredibly coy and casual with their appearances in the Boileroom. Climbing on stage to tune guitars and test mics, Don addresses the cheers into the microphone ‘I’m just here doing some work, I’ll come back in a bit and we can have a real nice show then’. Opening with Leave Me Alone, and following with their recent re-release Shag-Tally-Tastic, Lady Bird quickly had the entire crowd singing along to every word and hitting every beat. Social Potions quickly followed alongside a few new songs – we mentioned in our preview that we hoped to see new music from the boys very soon. Unfortunately, I didn’t manage to catch any of the names (I’m not sure they were even said) but I’ve lovingly dubbed them accordingly.

A new reggae-vibed belter complaining about the current state of politics in the UK repeated the mantra “Political Wasteland” quickly leant into a new fast-paced song that saw guitarist Alex and drummer Joe play the fastest that I’ve ever heard the boys go, with Don spitting bars faster then I could keep up. I can’t wait to hear the studio version of this song to really go in-depth, but you’ll just have to believe me when I say it sounded great.

At this point, the lads stopped for a minute to take a well-deserved breather. Don took to the mic to ask if everyone was alright, commented on Brexit, and reminded us “We aren’t political. We just drink Stella. And play music.”

They burst into Boot Fillers to a resounding chorus of ‘Da da da da dahhh’ from the crowd and a bit of a jostle in the pit, which left a smell of sweat wafting through the Boileroom that created a hypocritical air of tranquillity and respect between the artists and the audience. Following into Reprisal, the band got through to the first chorus before stopping to yet more technical issues. After rejigging a cable on the synth organ, they ‘reprised’ the piece to perfection.

Another new song which I assume is called ‘Wicked War of the West’ slowed down the mood as the black hole of moshers began to sway calmly to the beat. It’s not often you see a band control the audience so well. The band finished with their seminal tracks Spoons and Baby. The crowd responded consistently by belting out every lyric – “baby, baby… we can work togevaaaa” – and closed the gig with an uproar chorus of cheers and chants of “one more song”, at which point the band were already in the back of the hall mingling with their friends and family.

This was my first time seeing Lady Bird live after being a fan since I first heard Spoons; my housemate showed me it in the first year of university whilst we were waiting for our drinks in our own local spoons. It’s a shame this gig was afflicted with numerous technical issues; I’m struggling to think of how to rate the evening. I’m already looking forward to the next gig I have the pleasure of attending – I feel like Lady Bird’s hometown of Tunbridge Wells, my old stomping ground, is not a gig to miss. Unfortunately, this one’s sold out… but I’m sure I’ll catch you at the next one…

You can still grab tickets to the Untour here; we couldn’t recommend it more.

19 The Forum, Tunbridge Wells – SOLD OUT 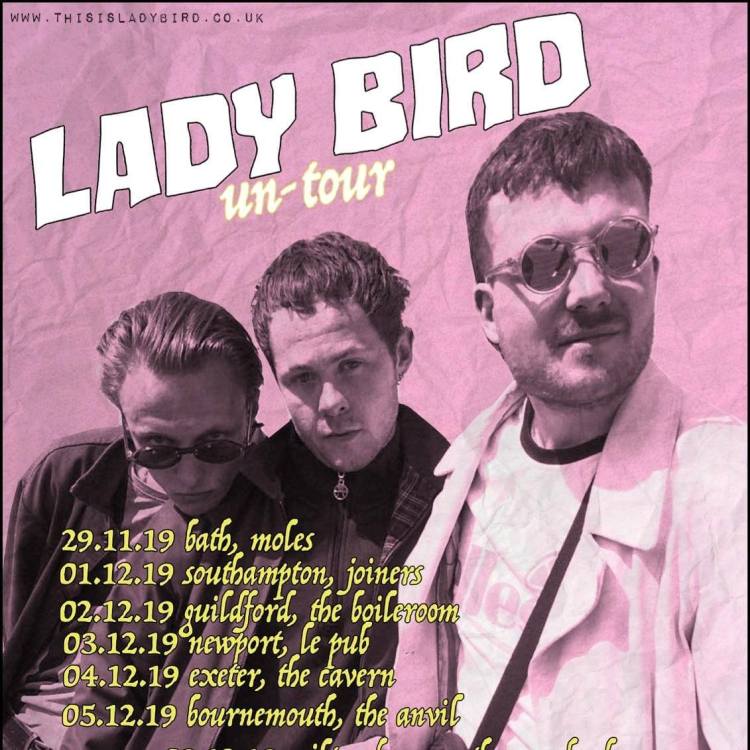