2019’s Heavy Music Awards picked up where they left off last year and continued to champion the best artists, events, photographs, designers & producers from the heavy music industry.

The evening kicked off with local duo, Delaire The Liar whetting the sizeable crowd’s appetite with their brash punk-emo dynamic leaving a lasting impression. Vocalist and guitarist Ffin Colley’s impeccable voice commanded centre stage and defined a performance that proved these guys are packed with bags of potential.

Nova Twins were up next and went above in playing their part to keep up the noise in the room. Also hailing from London, they ruthlessly rattled through a number of tunes laced with muddy and fuzzy riffs. A combination of devilishly shrieking vocals and the itchy wailings of a whammy pedal gave Nova Twins’ grunge vibe an innovative Nu-Metal feel. Exciting stuff.

An icon of the scene, Laura Jane Grace took on the role of event host at the o2 Kentish Town Forum and did so with aplomb. The winners of the first set of awards were:

With an already impressive portfolio boasting work with some of the industries most exciting properties including the likes of Enter Shikari, Babymetal and Bury Tomorrow, it’s safe to say that Dan Weller is a man in form. Not only is the resurgence of his band SikTh on the ascendancy, Weller also has a number of projects as a producer in the works for 2019 – notably – the hugely anticipated debut album for UK up and comers Dream State. 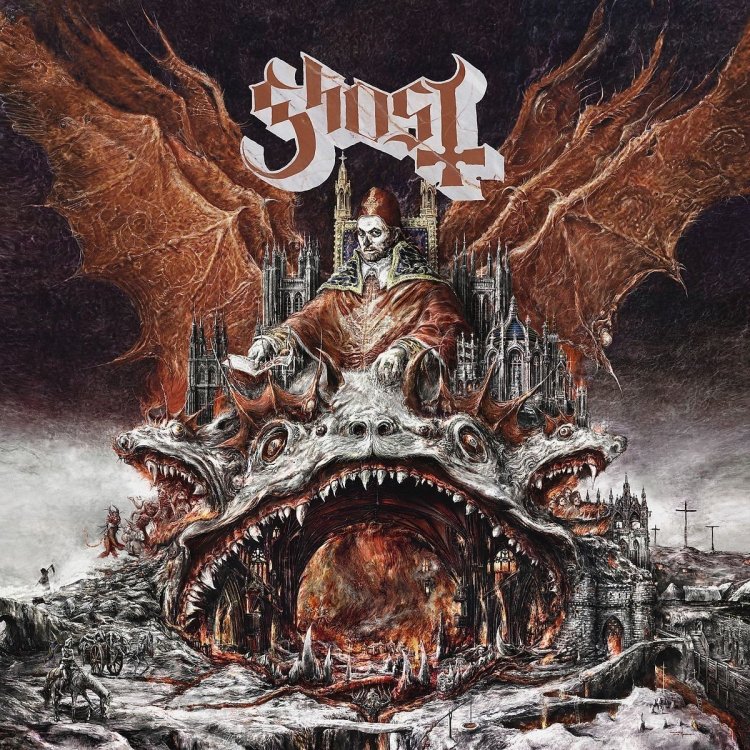 Just look at it. A layered and incredibly detailed piece that is both beautiful and utterly terrifying. Magnificent.

The only band to clinch a gong at each HMA ceremony to date, Architects deliver once again thanks to their unanimously praised live performances. Off the back of their most recent LP Holy Hell dropping towards the end of 2018, the Brighton powerhouse kicked off 2019 with an extensive run of dates across the UK and EU, including a mammoth show at The SSE Wembley Arena. Following this, a huge US tour and a plethora of prolific festival dates both far and near have ensured the band are keeping a busy schedule over the Summer.

Moving from strength to strength since their formation in summer 2017, FEVER 333 are the embodiment of everything that makes this scene so compelling. Operating under the doctrine of the 3 Cs (Community, Charity, Change), Jason Aalon Butler and co. are exercising their voices to promote the power of unity to the masses. If you say it loud enough, they will listen. You won’t hear louder than FEVER 333.

The yearly heavy metal weekender set in picturesque Derbyshire is currently looking forward to its 20th anniversary off the back of a customarily successful 2019. With previous headliners of recent years including the likes of Parkway Drive, Judas Priest and Gojira, this really is the place to be for all metalheads alike.

The third and penultimate artist to grace the stage wielding their instruments were Liverpudlian powerhouses Loathe. Quite considerably the most impressive set of the evening, Loathe near enough blew the roof off of one of London’s most cherished venues. It’s Yours left a particularly lasting impression, with frontman Kadeem France demanding the captivation of every single onlooker in the room.

A household name in the music photography game, Paul Harries has been plying his craft for over two decades. Think of the biggest names in the scene and chances are Harries has worked with them – Nirvana? Check. Green Day? Check. blink-182? Check. – to call this portfolio extensive would be a cruel understatement.

Presented by The Pit

Aussie quintet Parkway Drive have been spreading their brand of metalcore across the globe since 2003 and have never let up in doing so. 2018’s Reverance marked a slight change in Parkway Drive’s final product and demonstrates the more experimental capabilities that these guys have in their lockers. It’s no mistake that this band continue to earn recognition from all corners of the world, including at the Heavy Music Awards.

The H award serves to recognise and celebrate ‘exceptional positive contribution to the heavy music scene’. The Dixons have provided a safe haven for countless touring artists, selflessly welcoming them into their home and accommodating the tirelessly working musicians that are often unable to budget for cushy hotel rooms in between shows. Embracing and nourishing the grassroots is what heavy music is founded on and people like The Dixons are a credit to the movement.

Since the release of their hugely acclaimed second EP Recovery, Dream State have found themselves with the world at their feet. With a debut album imminent off the back of signing with UNFD, exciting times are ahead. The question hanging over the head of the forthcoming Primrose Path isn’t whether it’ll be any good – that’s a given – rather, just to what extent are Dream State about to change the game?

Winner: Bring Me The Horizon

A band this loud securing a number one album in the UK is no mean feat. If anyone is capable of doing so, it’s Bring Me The Horizon. Lacklustre acceptance speech video from frontman Oli Sykes aside, it’s hard to argue with the impression that 2019’s amo has left on fans both old and new.

Architects at the double, picking up their second award of the evening and it’s another big-hitter (arguably the biggest) with ‘Best Album’. Holy Hell is a record born from the grief experienced from the tragic passing of guitarist and songwriter, Tom Searle. Beautifully agonising, blisteringly powerful and blissfully melodic all in one – Holy Hell is a more than deserving winner of this accolade.

Closing out the evening was Cancer Bats who took the stage all guns blazing and provided a suitably heavy end to an event celebrating just that. The Canadian 4-piece got heads banging and limbs flailing with their refined hardcore punk riot act, ensuring that everyone in attendance left as enthused as any good heavy metal show should.

So, that’s a wrap! All winners and nominees alike more than worthy of their accolades. Full credit to the team at Heavy Music Awards for continuing to promote all things loud and proud. Here’s to next year.