Despite being a fairly new festival, debuting in June 2017, Community festival has boasted headliners from Catfish and The Bottlemen to this year’s headlining act The Kooks, in Finsbury Park, London. Community festival is known for its vast array of ‘indie’ acts and this year’s line-up undoubtedly fit these criteria with performances from acts like Blossoms and Don Broco. The festival allows for attendees to feel comfortable and composed, knowing that they shall be returning to the warmth of their beds that evening, rather than camping out in the wilderness. This is possibly one of the reasons it attracts so many people to come, as the organisers manage to fit such a vast range of acts into one single day. 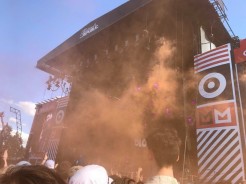 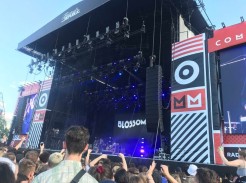 The day began, much like most attending, with a premixed can, bumbag and a bucket hat on the train, followed by the tube up to Finsbury Park. Upon arrival, all we could hear were chants of “Oh Gerry Cinnamon!” – fans of the Scottish singer making their support heard early doors. His performance was intriguing and honest as the 33-year-old singer-songwriter played with just his voice and an acoustic guitar.

Next up was Kate Nash, who heavily relied on the classic 2007 hit Foundations to keep the audience on their toes. Many of her other tracks (apologies to diehard Nash fans) sounded like her famous hit but lacked the joyous overtone of the crowd singing along. Subsequently following on the main Stage was The Hunna who attracted a larger crowd, but left fans disappointed as the instruments dominated the speakers, making it a struggle to hear any of the lyrics.

Just before the main act, Blossoms took their rightful place on the main stage. The relaxed and imperturbable group of boys spoiled their fans with a combination of songs from their debut album Blossoms and their

most recent album Cool Like You. The likes of Charlemagne to Getaway sounded seamless – even better than the original tracks themselves. However, they favoured their upbeat tracks over their slower ones as one of their most renowned hits My Favourite Room was omitted from their setlist. They certainly differed from their predecessors Don Broco and satisfied the overall indie atmosphere of the festival perfectly.In contrast to The Hunna, Don Broco’s performance was enormously engaging, with lead singer Rob Damiani’s unique voice intriguing new listeners and satisfying their existing fans. He grinned like a toddler throughout the entirety of the set, and also hinted at an upcoming album for 2019 by performing Half Man Half God, the first single allegedly released from the record. Don Broco certainly lived up to expectations as an alt-rock powerhouse by providing plenty of action-filled mosh pits and circle pits organised by the frontman himself! If not a fan already, I think Don Broco did their job well in drawing in even more prospective punters.

The two stages, the Main stage, and the N4 stage, allowed for more acts to perform but also meant that there were multiple clashes, with The Amazons headlining the N4 stage, competing with the renowned The Kooks. The choice to see The Kooks was an easy option for me, however, The Amazons are an incredibly talented, innovative upcoming band to look out for in the indie scene. The Kooks dipped and dived into each of their five albums, but it was clear from the roaring reaction of the crowd that older classics like She Moves in Her Own Way, Shine On, and Seaside were appreciated most by the masses. If you haven’t seen them perform before, I fully recommend it. Their music is unbelievably laidback, and high-spirited that it really sets the tone for summer. Lead singer Luke Pritchard reminisced fondly on stage, stating himself that he “loves doing the old ones!”, ensuring a sense of nostalgia spread throughout the entire festival grounds. By no surprise, they finished their 22-track setlist with the adored single Naïve and, of course, the crowd went wild, we were singing, dancing and laughing with those around us making the festival truly live up to its name:  Community.