Having first discovered Boston Manor at Slam Dunk 4 years ago, I knew something big was going to come of the Blackpudlian 5-piece. Songs such as Peach State and Driftwood are some of my favourites to this day, and still, these older tunes serve as a reminder of how impressive this band are. From here, the band released their first LP, Be Nothing. and have, rightly so, gained an impressive following. As their venue capacity continually creeps up exponentially with their Spotify streams, it feels like everything is falling into place for Welcome to the Neighbourhood to springboard the band to undeniable stardom. It is time for a new era of Boston Manor. Aesthetically haunting and audible mature, the boys are back with a release that is nothing short of emphatic.

However, before I get into the meat and potatoes of the new music I must take a moment to cement how incredible the singles have been from this album. Halo, which has really set the tone (both visually and sonically) for what we should expect from the album, is undoubtedly the catchiest track the band have written. Featuring substance abuse as a central theme, this track is undeniably infectious and I promise (like, PROMISE) that after one listen you will be hooked. Similarly, Bad Machine makes for a gripping listen. The band played the song at this year’s 2000trees festival, and despite my alcohol-soaked state, I was very excited for it to come out as a single. I feel as though my anticipation was justified after giving it a few full spins. This track inhales and exhales with raw and powerful spite and will, like its fellow single, keep you coming back for more. This is one of the highest calibre songs I have heard this year and really sets the mood for the world that the album builds. Bad Machine is a track you should listen to before the album.

Now, the reason that you and I are both here. Welcome to the Neighbourhood kicks off the album, and what a way to begin. We are introduced to the song by an eerie ringing before we are joined by Henry Cox. There is a natural swagger about his voice that really helps to cement the Boston Manor sound.

This is what it’s all about,
You better watch your mouth,
You can’t beat this feeling,
You never heard anything.
People from here never leave,
I’ve seen it happen to me,
Nothing in life comes for free.

The lyrics are strong and astute. The first four bars are delivered with a crooning, smooth style before we are given them in a Don Broco-esque pre-chorus accelerated fashion. The change in pace here is what makes the song so gripping – it is like nothing we have seen from the band before. After we have run through a couple of verses and the chorus twice, the song returns to its eerie nature. Instruments begin to scream and slowly plod to their conclusion. The outro is as haunting as the introduction and about 40 seconds of pulsing closes the show. Welcome to the Neighbourhood is a great track and again, really sets about building this world – one of pain and loitering sadness, themes that continue to return throughout the release.

Flowers In Your Dustbin arrives with a punching bassline delivered by Dan Cunniff, and it is one that really blows away the shackles left by the end of the opening track. Once the song kicks in, with all members of the band contributing something to the sound, the tone feels somewhat upbeat – however, I think this is a result of intense nature of the album’s opener and singles. The melody found in this song – featured predominantly in the chorus – is reminiscent of the textbook Boston Manor sound we have grown to love. Cox’s vocals fade in layers between long, drawn-out notes and more intricate, moments of flare. There is so much personality and character in his voice. The breakdown that comes around the 2-minute mark of the listener is told to “shoot them all” and “let [them] sort them out”. The delivery of this lyric begins softly before we are greeted by an intense scream. From here, the song is left to brood and collapse under its own devices.

England’s Dreaming, once again, opens in a haunting fashion as the riff hangs and pierces at every turn. The cool delivery of “bury me” marks the beginning of the song. The verse and its lyrics are delivered, despite the theme of the track and the introduction, in a smooth and relaxed fashion. Once again, we are given some trademark Boston Manor chorus melodies which really complete this song. The refrain of “bury me” distances the track from its title, giving the listener some space to decipher the different layers of the song. Before England’s Dreaming is out, we get one more exhale from the band while the song doubles in pace and closes out with a bang. From here, Funeral Party takes over. Synthetic drum beats introduce us and are quickly joined by a riff. Once again, the vocals of Cox offer the listener a completely different flavour. However, the opening verse only lasts briefly and before long we are thrown – with a scream – into the chorus. The pacing of the main portion of this song makes it impossible to do anything but nod your head, and I am sure that Cox’s trademark hip thrusts will be implemented when this track is played live. The breakdown is very impressive in this song. Complete with what sounds like radio broadcast about the “seaside of Lancashire”, the track fills out to ensure its conclusion is as impressive as its opening.

Digital Ghost begins in a softer, more measured manner and this acts as a great rest bite by this point of the album. However, I am not saying that it is boring by any means. When the song does shift gear, it is emphatic. The background vocals of “in the fold” and “in the bowl” that come in between the cries of “Digital Ghost” and “you are the dust” in the chorus give us something different. Once again, there is a swagger about the delivery of this track and the dynamic shifts between the softer, crooning vocals and the shouty, stretched ones gives us a full, accurate representation of the full vocal palette on offer. Tunnel Vision is up next and upholds the, by this point, standard dark opening. This time it is even complete with the theatrical, distant cries of possessed laughter. As soon as this track kicked in, I released that it will undoubtedly make its way into the band’s live set. “Baby I’m dreaming and everyone’s lonely” is a wonderfully personal lyric and has so many layers of delicacy to unpick. As one of my favourites on the album, I am sure it will begin to accompany colourful sketches of anchors and flowers to make up tattoo designs that be featured on Instagram in the coming weeks. Although this album is powerful and bursts with energy, each track feels measured and planned – Tunnel Vision is a testament to this.

By the time If I Can’t Have It No One Can comes around we are 9 tracks deep into the album, and for me, this one is worth the wait. As one of my personal favourites, this song does a little bit of every. From brash lyrics such as “I like to drink and fuck and fight” to the constant changes in pace throughout the song, this song keeps you entertained from first note to last.

If push came to shove, I wouldn’t think twice,
I’d slit your throat just to survive.

If I Can’t Have It No One Can is by far one of the darkest songs on the album, despite the name of the track that follows, and I feel as though it is one that must be heard. 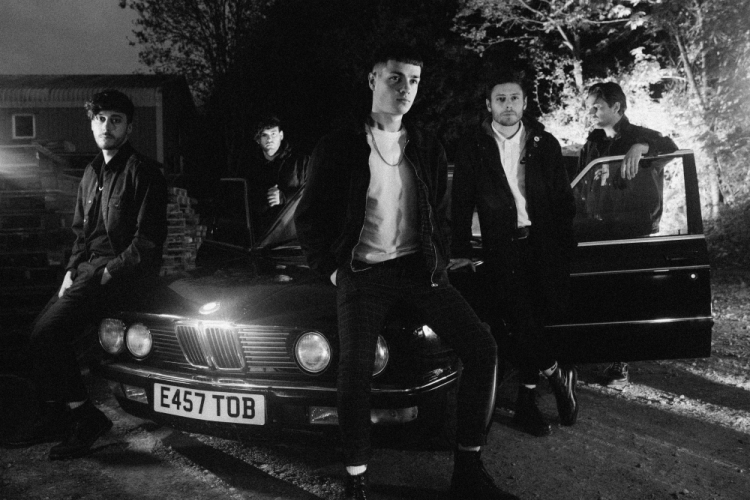 Hate You upholds the head nodding, swank level set by the opening half of the album. Experimenting a little more heavily with synths in this track – especially in the breakdown – the band keep their music sounding fresh, even as the album comes to a close. As another track, which I am sure, will induce mosh pits and hip swaying from Cox if it is selected in setlists – this song is a nothing short of a bop. FY1 is the only track that, to me, feels a little overdone. I wouldn’t go as far to say it detracts from the album, but it just doesn’t seem to add anything more than what the music is doing. As an instrumental piece, it builds the atmosphere a little, but I think that because of the way the album is put together it feels a little redundant. The music is of such a high calibre, it does enough of the talking. Up next is Stick Up. This track opens with an upbeat feel, playing with what feels like some different sounds. The keys used add something refreshing and the chorus has one of the catchiest hooks of the entire album. As the penultimate track of the album, Stick Up still harnesses the fight and passion seen from the singles and opening tracks. I would find it very difficult to pick my three favourite tracks from this album.

It is refreshing that Boston Manor haven’t felt the need to include a noticeably softer or acoustic track to offer the listener a flavour of something different mid-album. Instead, they confidently use this tool to bring a conclusion to the piece. The Day I Ruined Your Life is beautiful and really reflects on the key themes at play seen in this album. So many artists, in the alternative sphere, in particular, focus on their hometown and how music has been an outlet for their escape. What Boston Manor do, however, is bravely confront the issues at play and do what most are afraid to do – they discuss it. This track boasts moments of brilliance and aptly reflects the quality of the album as a whole.

The world built throughout this album is incredibly detailed. Alluding to their hometown, but personifying the problems with drugs, sorrow and mundanity so brilliantly, Boston Manor have written more than just an album. Welcome to the Neighbourhood feels like an approachable, digestible social commentary which keeps you engaged. I am sure that with their fan-base, which feels to a be an ever-diversifying yet relatively young one, this album will be of incredible importance. It has bite, spite and influence that is sure to catch the imagination of the masses. Be Nothing. was an incredibly produced album, one that offered a little bit of everything while still keeping the Boston Manor blueprint at its core. However, what we have with this album is a band pillaging their sound for only its very best bits and throwing the rest away – rewriting the expectations of the Boston Manor with it. Welcome to the Neighbourhood is confident, hard-hitting and will be one of the albums of the year.